In the context of ASMS, DYNASAT presented two papers during the “Beamforming and Scheduling” session on September 7, 2022

This year’s ASMS/SPSC conference brought together not only well-known Satellite Communications industry players such as ESA, Thales Alenia Space, Eutelsat, and Airbus. It also brought together key players from the terrestrial and vertical markets, including Ericsson, Huawei, Qualcomm, Orange, and BMW. This once-in-a-lifetime opportunity sparked insightful technical discussions and reinforced a common message heard across all sectors: in order to realise a unified 6G infrastructure in the coming years, terrestrial and non-terrestrial networks must collaborate and be designed collaboratively.

DYNASAT partners were delighted to meet top industries and operators from the global terrestrial and satellite communities in person. The collected comments confirmed to the team that the project’s efforts were on the right track, perfectly aligned and synergistic with R&D and standardisation efforts for Beyond 5G communications.

The 11th Advanced Satellite Multimedia Systems Conference (ASMS) took place in a joint format together with the 17th Signal Processing for Space Communications (SPSC) Workshop. DLR Institute for Communications and Navigation and JOANNEUM RESEARCH organised the events, with the scientific support of the European Space Agency, the University of Bologna and the Graz University of Technology. The topic of the conference focused on the role of Satellite Communications within future integrated 6G networks. 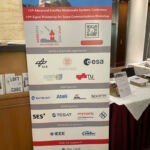