On June 8-10, 2022, DYNASAT exhibited at the EuCNC and 6G Summit in Grenoble. In addition to presenting a paper titled “Location-Assisted Precoding in 5G LEO Systems: Architectures and Performances”, two project partners performed demonstrations at the project stand in the exhibition area.

The demonstration performed at the EuCNC and 6G Summit 2022 consisted of three sub-demonstrations:

Demo 3 was carried out using a web browser. The demonstration website consisted of the following parts: technical parameters, map-based user interface, Key Performance Indicator (KPI), and performance graphs. In the demonstration, the user was able to select between French regions, French mobile operators, and their 3GPP generation. The locations of the base-stations inside the selection were shown on the map. The tool computed which LEO satellite beams could be active around the selected mobile network deployment so that the satellite beams do not cause harmful interference to the terrestrial mobile network. The section for KPIs and performance graphs visualized the performance of the system in terms of coverage, interference, capacity, and Spectrum Utilization Efficiency. The demonstration focused on showing the benefit to an actual user of the system rather than technical details. Highly visual web-based graphical demonstration tools were used. 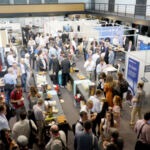 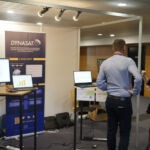 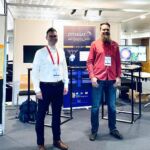 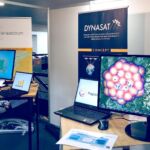 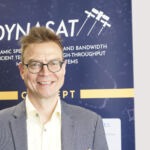 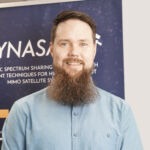 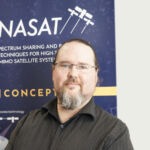 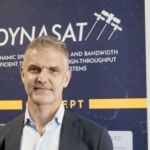 Located at the entrance to the conference hall, the DYNASAT booth enjoyed high interest from the conference participants keen on learning about the project and seeing the demonstrations performed by two DYNASAT project partners: Magister Solutions and Fairspectrum.

Watch the interview(s) with the DYNASAT consortium members to learn more about the project and its presence at the EuCNC and 6G Summit 2022!

About the EuCNC & 6G Summit

The EuCNC & 6G Summit 2022 builds on putting together two successful conferences in the area of telecommunications: the European Conference on Networks and Communications (EuCNC), supported by the European Commission and the 6G Summit, which originated from the Finnish 6G Flagship program. The conference is sponsored by the IEEE Communications Society and the European Association for Signal Processing. The event focuses on all aspects of telecommunications, ranging from 5G deployment and mobile IoT to 6G exploration and future communications systems and networks, including experimentation and testbeds as well as applications and services. The 2022 edition was held in Grenoble, France in a hybrid mode with the possibility of both in-person and remote attendance.